A. Sheppard Consulting and Clients In The News 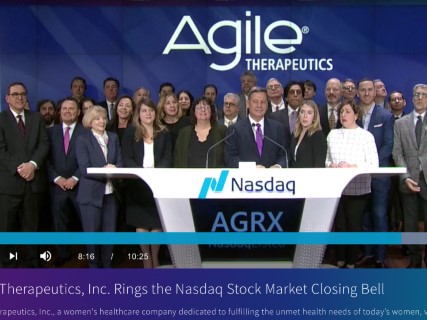 Audrey attends 2/26/20 closing bell ringing at NASDAQ for Agile Therapeutics, which recently won FDA approval for its contraceptive patch. The Sheppard firm was instrumental in working with women’s organizations to make them aware of this safe, lower-dose birth control option.

New York Times (April 9, 2019) You’re Covered in Fungi. How Does That Affect Your Health?

New York Times (April 9, 2019) Most Osteoporosis Drugs Don’t Build Bone. This One Does.

Sprout Pharmaceuticals (March 21, 2019) Sprout Pharmaceuticals Presents Important New Addyi Safety and Tolerability Data through Three Alcohol Interaction Studies in Which There Was No Syncope or Orthostatic Hypotension Requiring Medical Attention and No Increase in Adverse Events of Special Interest

Stat News (January 7, 2019) All seven of the FDA’s recent commissioners agree it should be independent — but not on how to accomplish it

Stat News (August 16, 2018) A women’s health startup tried to drum up interest for a much-needed drug. Many men didn’t get it

Forbes (June 18, 2018)  Female Sex Drive Booster Addyi Is Back, But Will Second Time Around Be Different?

Sprout Pharmaceuticals (November 7, 2017)  Valeant Is Paying to Get Rid of Its $1 Billion 'Female Viagra' Acquisition

AirXpanders (October 17, 2017) The 12 most important health innovations of the year

Antidote (September 6, 2017)  Merck just plowed millions into this start-up to help get drugs to market faster

Cynosure- (Sept. 30, 2016): Cynosure Recognized as One of FORTUNE's 100 Fastest-Growing Companies

UsAgainstAlzheimer's (May 13, 2016)- During Convening, WomenAgainstAlzheimer’s Launches Its Bold We Won’t Wait Campaign To Highlight The Economic Injustice Of The Disease On Women